I found out about The Baby Box from my midwife at my first appointment in the UK.  I had no idea what she was talking about to be honest- a box for my baby to sleep in??  But she told me to go online and do a quiz and that it would be sent to me for free so I thought why not.

What is a Baby Box? 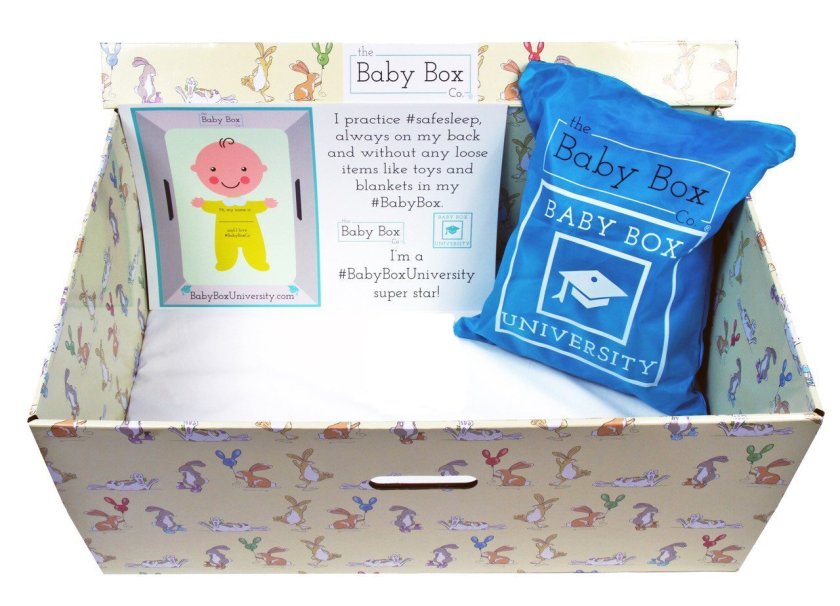 The Baby Box idea is a Finnish tradition that was started by the government with the aim of reducing SIDS (Sudden Infant Death Syndrome).  It was proved highly effective, with Finland going from having one of the highest infant mortality rates in Europe to being the 5th lowest in the world.  It has been in practice now for over 80 years and The Baby Box Co. have been introducing a similar scheme with an emphasis on safe sleep education to the UK since 2017 I believe, plus 51 other countries around the globe.

The box is intended to provide a safe sleeping place for your baby’s first six months of life.  It is quite literally a box made of durable cardboard with a foam mattress, to be used in the same way as a Moses basket.  Unlike a Moses basket, it is placed on the floor as it has no stand, but this also makes it more easily transportable.

In order to receive the box you need to first pass some questions online to do with safe sleep practice.  Jonny and I set aside some time to watch the educational videos and answer the quizzes at the end of each section together.  It was quite horrible to learn how SIDS, or ‘cot death’, affects 200 babies a year in the UK, but at the same time, we were grateful to be provided with these resources so that we could be more well-informed on the matter.  In addition to information about safe sleep practice there is also lots of other content available on the website regarding the safe care of infants, breastfeeding resources, tips and advice for new parents in general etc. 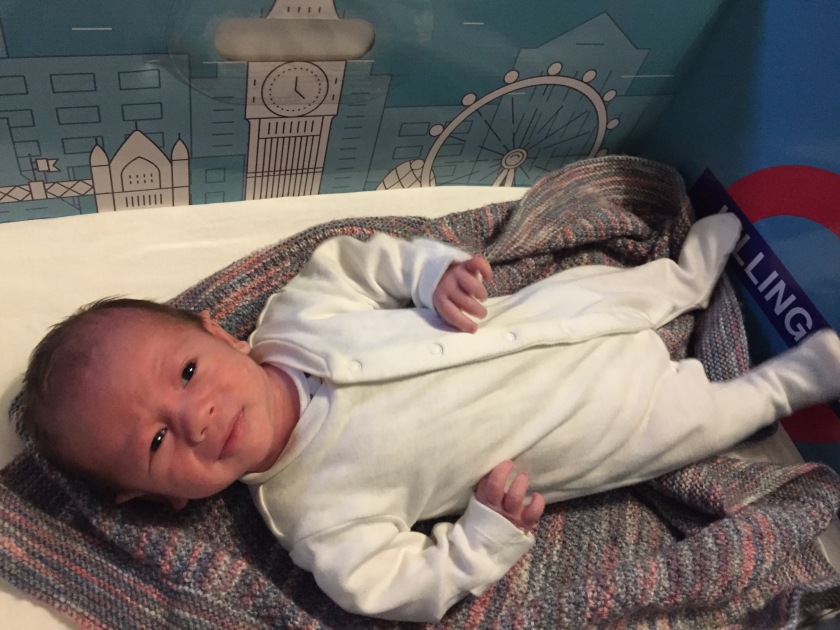 My baby box arrived quite quickly, just a few days after we’d completed the test (it didn’t take long to complete everything, around twenty minutes).  The designs are all different and randomly selected so I was delighted to find my box had a London theme print with iconic places such as Big Ben, Tower Bridge and the London Eye (I am a Londoner after all!).  Inside the box was a zipper bag with a cotton muslin cloth and information, then there was a mattress with mattress sheet.  The box seemed well made and sturdy and there are warnings for you to always put it on a flat surface on the ground.

I was eager to try to use it after Oscar was born and thought it would be a perfect solution for having a place for him to sleep downstairs as our Moses basket was not so easy to move around.  It would be a dream if Oscar could sleep in it while I got on with housework or cooking, and then I wouldn’t need to keep running up to check on him.

I was worried the cats would jump in it, which they did sometimes (not when Oscar was inside luckily!) And being on the floor, I just made sure it was away from doorways incase somebody came by and fell on him or something!  I never left the room alone with him in it and if I did need to run to get a drink I would close the door incase the cats came in.

I think for any other baby, the Baby Box would have been a great place for them to stay in for daytime naps.  Unfortunately our Oscar was not a napper from day one (unless it was on me).  Where I would hear stories of mums having to wake their babies up for feeds, it felt like my baby was always up, refusing to nap and demanding endless feeds  (he only really started napping from 8 months…!).  So in total, I think Oscar really slept in it only a handful of times, but for those times where he was able to settle and sleep, it was perfect and I was so grateful for this box!  I did hear comments from others who thought it was ugly and weird to have a cardboard box and they just threw it out which saddened me as other families would have found it useful.

After it became apparent he wouldn’t nap in the day (I did of course spend many hours of many many days trying to get him to nap in his Moses basket or bouncer too), I did eventually give up trying and we re-purposed the box into a toy box which we are still happily using.  Even though Oscar rummages through the box quite often the sides are still pretty intact.  I would probably consider using a Baby Box again if we were to have a baby number 2 but I’m not sure how clean I would be able to get this one by reusing it again, considering it is made of cardboard.   I was lucky for Oscar to never have had a leaky nappy in it because I’m not sure it would hold very well if it were to go through the thin mattress onto the box!

I think we were very fortunate to have this initiative rolled out to Ipswich Hospital because I don’t think it is available in every area in the country yet; you can check on the website if it is available from your hospital or not.  You can also buy one if they are not available and some options have many useful things inside for a newborn so it could make a nice gift for someone expecting.  I think it was a brilliant money saver for us not having to buy a downstairs cot and we are still using it months on for his toys.  I especially like that the cardboard can be recycled afterwards too!

Did you use a baby box for your baby?  I’d love to hear how you got on with it and what you made of the scheme!

One thought on “Oscar And The Baby Box”

This site uses Akismet to reduce spam. Learn how your comment data is processed.