I love these muffins! Please note I have adapted this recipe for baking for my children and converted it to UK metric measurements for ease.

These are perfect as an on-the-go snack as well as for breakfast. They are easy to make with your little ones as you only need a spoon and two bowls!  And best of all they are healthy, using honey as a sweetener (you could switch to maple syrup for under 1s). The muffins have an addition of flaxseed meal to replace one egg whilst adding extra omega-3s, and uses less fat compared to conventional muffins thanks to the addition of greek yoghurt (which also keeps it moist). You can use fresh or frozen raspberries and switch it for blueberries if you wanted!

I have written the ingredients for 6 muffins only. This is because so many times I want to bake but with it only being me, my husband and one toddler eating plus limited freezer space, we end up with excess and eat too many! Of course if you want to feed more mouths or for sharing, you can double or triple etc the recipe.

Another thing to note is that we normally don’t cook with much salt but it is quite essential in baking to bring out the flavours. I would omit the salt for under 1s and just a tiny pinch of it for toddlers.

How To Make Yummy Muffins

Place onto wire baking rack after about 5 minutes to prevent tough cakes. Wait until cool and enjoy on their own or spread with nut butter on top.

Standout Pieces In Our Teal and Copper Bedroom

Our bedroom and ensuite was renovated from scratch when we moved into our house one and a half years ago, but we are still adding pieces to it to make it ours! I’ve written about what changes we’ve made and my favourite features. Also I wanted to share the lessons I have learnt in the…

Playing with Bread And Toast

This activity cost me 20p and kept my child entertained for over 2 hours. It was so simple and fun that I thought I would share about it! I had seen an activity involving building towers our of toast somewhere, so I decided to pick up some cheap white bread the next time I was…

How To Fix A Split Nail With A Teabag!

So I went to paint my nails which had grown pretty long the last couple of months (did you know that nails grow faster in the sunshine due to more exposure to vitamin D?) when of course, one of my nails split… right down the middle… to the nail bed! Why does one nail always…

We whipped up a yummy collab meal tonight which was totally scrumptious for a quick food night.  We had wanted to do a big dinner since Mondays are now the only day off together, but life happens and we ended up eating at 9pm again, doh >_<

Anyway, so the highlight was Jonny’s porkchop which had been marinated in apple, fennel and mint for 3 days.  Fried and chopped, we put it on top of a bed of simple salad with olive oil and lime.

I made some spelt flatbreads, drizzled olive oil and topped it with zaa’tar (toasted sesame seeds, sumac, thyme, oregano and salt) before grilling for a few minutes.

Then with a leftover potato and yoghurt, Jonny made a quick potato salad with coriander and lemon juice.

Well del! (this means it was rather delicious)

Also this has been a rather busy week of hand foods!  Wraps and foods you can build with your hands are the best.

You may (or may not) have noticed that we are eating meatballs for the second time this week.  But that meat mix Butcher Farrell made last night was just too good to freeze for later..!

So using the same meat mix for our koftas, we made a courgetti/ zoodles bowl for dinner. Our healthgetti consisted of raw julienned courgette, our raw tomato sauce similar to the one we had on Friday night for our meatball night, with meatballs & a sprinkle of parmigianno-reggiano.  Served with a balso/ olive oil/ lemon simple salad.  As usual, Jonny dealt with the meat and sauce, and I had an easy night of sorting out the veg and salad (it took about 2 minutes!). 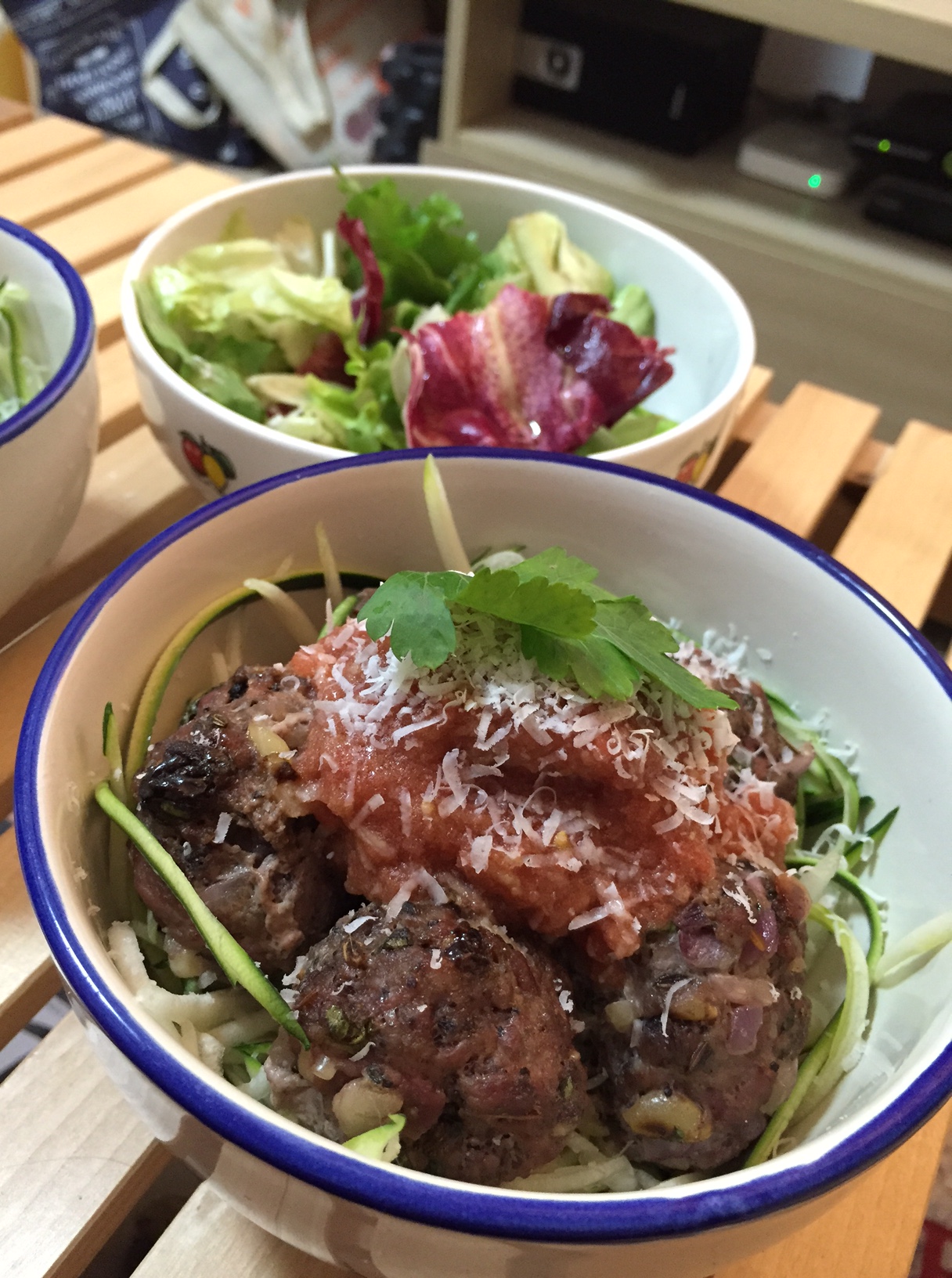 Verdict – tasty!! I wanted a light dinner after binging on palmiers and puff pastry twists all day at work (#bakerlife), plus we just got back late from an after-work couples gym session, so this hit the spot :)!

»Written by The Butcher«

So, at work I’ve started using this new spice merchant and going through his list is like reading something from a Roald Dahl book. Last week’s delivery came and since then all my stuff has at least one of the spices.

At work I made some sausages with beef, beetroot, hibiscus and rose, with a little bit of horseradish! But me and Ames have wanted to do a collab using them at home. Both of us are off the booze right now, so what better way than a cheeky kebab at home on a Friday; healthier than one on a night out and a damn site cheaper!

So Ames made the flatbread with white flour, whole wheat flour, yoghurt, salt and pepper. After some kneading and a little rest, they baked on the frying pan.  She also made some sumac, olive oil and lemon dressing for the salad with chunky hummous (aka lazy hummous made by smashing chickpeas, tahini, garlic, lemon juice & salt together with a fork).  I made a hibiscus and yoghurt sauce, we love the floralness and tanginess of the hibiscus. 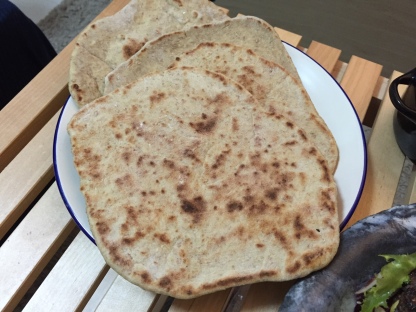 Koftas were a mix of beef chuck/brisket mince and lamb shoulder mince. I added the hibiscus, sumac, lime salt, cumin and fennel seeds, a touch of honey and shit load of garlic, some diced onion and parsley, some roasted pine nuts and a few grates of nutmeg. 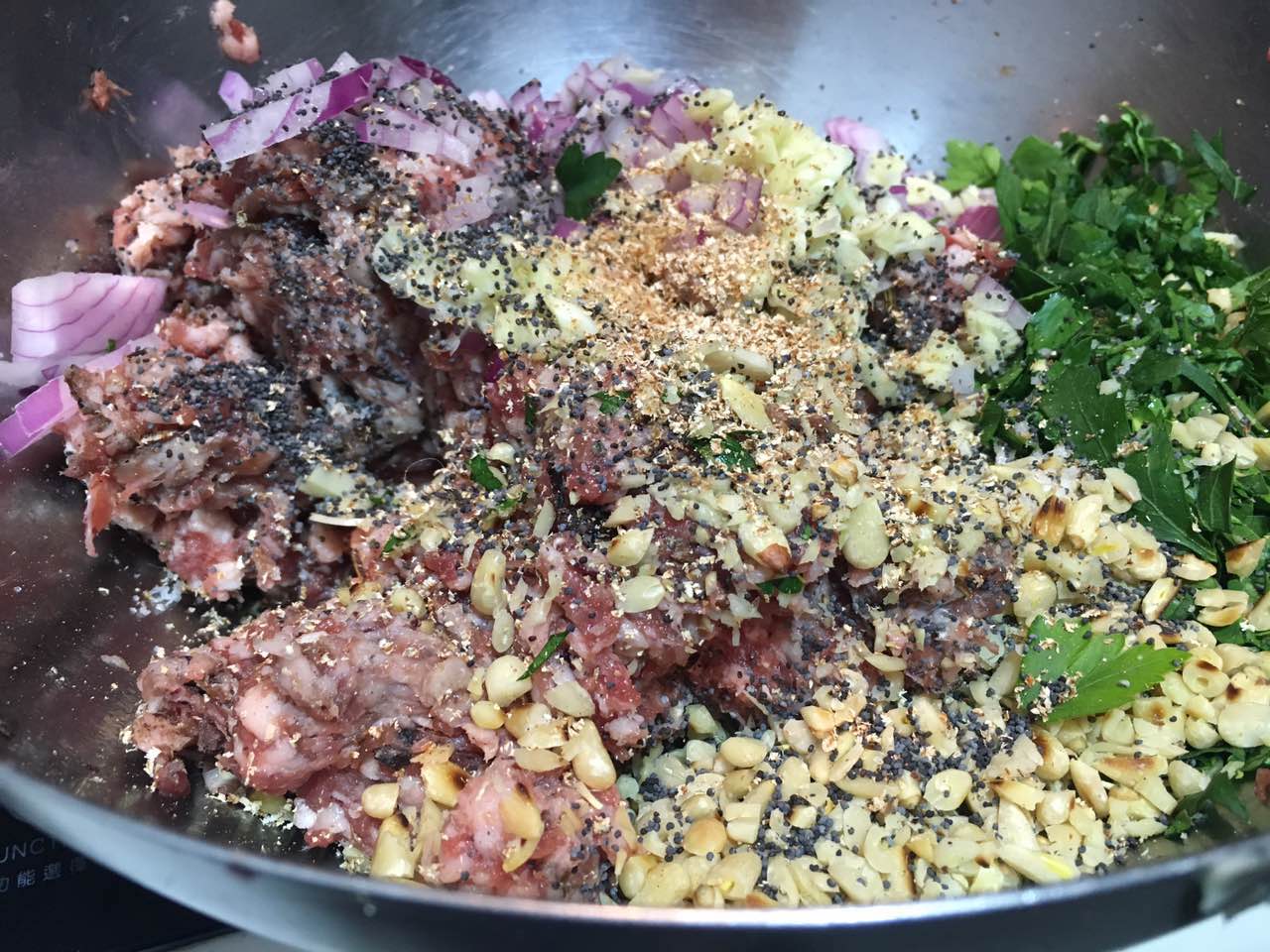 We’re both aiming to get super fit for a trip to Vietnam, so are on a health spree and trying to eat healthily. I’m going to file this bang tasty meal under 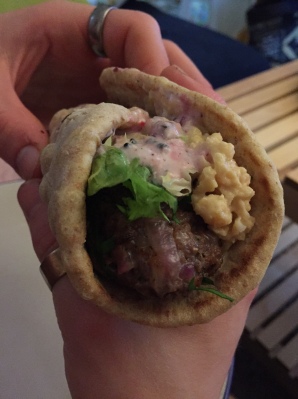 Wahey it’s our first post!  And this is Amy by the way!

So it was one of those nights where Jonny fancied some hand food (food you eat with your hands…) and I wanted to try a spelt focaccia, so this meal happened.

I began by preparing the focaccia.  I used my sourdough starter to leaven the bread and 100% wholegrain spelt flour.  Here’s the bread in its final proof with fresh rosemary, olive oil, and black pepper.  I added salt before baking.

Jonny prepared the mix for the meatballs.  All kinds of amazingness in this bowl: pork and beef, Italian style, packed with herbs, mozzarella and sweet peppers.

We paired the meatballs with a cold tomato based sauce and mozzarella, dipped the spelt focaccia in balso & oil… tada a yummy dinner!

We also built meatball sandwiches like you do with dairy lee lunchables at school… SO good!